A soundscape for the mind, heart, and soul.

Posted by Americ Azevedo No comments: Links to this post
Labels: enlightenment, wisdom

WORDS ARE MAPS of reality and dreams. Words are not reality, not dreams.
Better to stop now. Sit, walk around and breathe. Later, come back to the words. For words are the work of the world. Perhaps, the world would not exit without words; the "world" is a story we tell each other. Take away the story. What do you have left over? Just this, just that. Engaging directly what is; like a new born.
Of words, we don't need many. Just a phrase, a sound, can be enough to suggest reality.

Posted by Americ Azevedo No comments: Links to this post
Labels: meaning 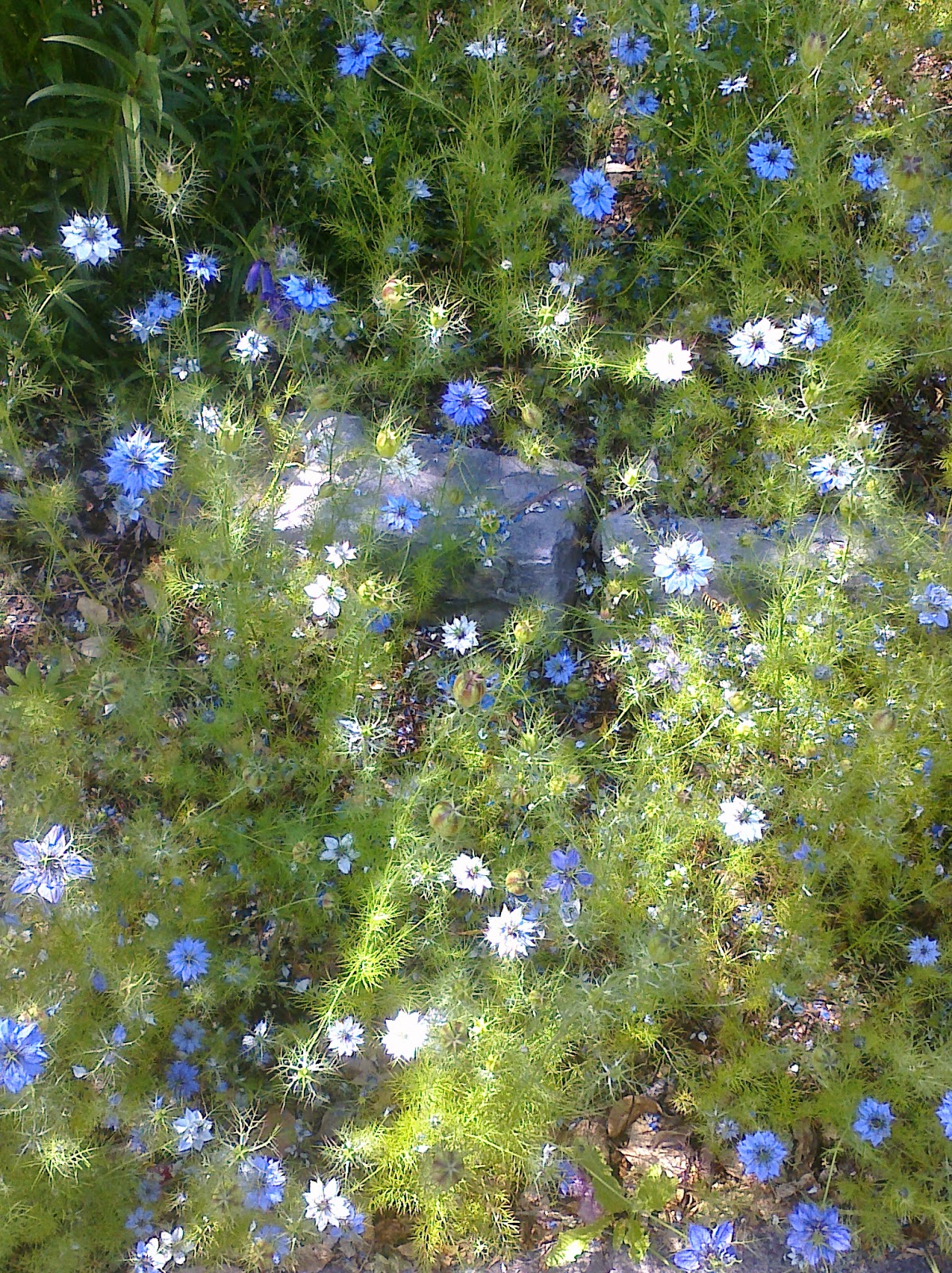 Posted by Americ Azevedo No comments: Links to this post
Labels: photoNotes, walking around

Friend!
You are the One
Remember that!

At home in the Park 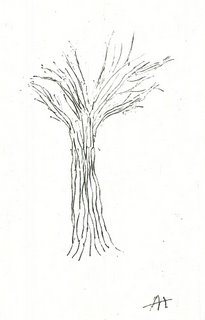 In the spring of 1990 my business partner and I stopped at People's Park in Berkeley. We sat on a log among the homeless people. Some were cooking food. Others rolled around in the grass with their loved ones. Some smoked weed and some drank booze. Most dressed in rags, tie-dye shirts, jeans, long hair, short hair, leather jackets, and bare chests.
We were two businessmen sitting there with them—would-be land developers. Such was the power of People's Park to attract all kinds of folks. A worn-out looking Park resident came up and said, "What are you guys doing here? You don't belong here!" My partner responded, "We're people too!" We kept sitting. The long-term resident shrugged his shoulders, indicating we were okay. We had established our turf on a log.
Dozens of homeless people lived in People's Park. Eventually the University built a volleyball court, and pushed some of them out into the streets of downtown Berkeley. But the Park remains; people still live there. For nearly 40 years People's Park has been a symbol and a home to people who did not or could not live the "American dream"—all for different reasons. There's freedom there. It is a freedom akin to crossing the Frontier in a covered wagon. Dangerous, lonely, and alienating, but space and time are your own in a way that no mortgage payer or renter ever knows.
Some Park people refuse to live in shelters. They want the street. This is their home. Others were in complete misery. They were there because they fell off the edge of the housing market. Not enough money from odd jobs, too few friends and family, a mind slipping away from the stress of life, and no housing they could afford. A formula for coming to the street as home.
Some of my radical friends from 15 years back became disgusted with the Park. One noble liberal preferred to work for social justice from his antiseptic non-profit office, while taking offense at People's Park. He wanted those dope-smoking bums out. He was once a radical fighting the establishment—now he and his associates were establishment but they didn't know it.
I've had my moments close to the edge. Only my friends kept me from the street. My business partner had similar troubles. You owe it to yourself to hang out with the dispossessed. As the Depression proved, very little separates us from the street.
Posted by Americ Azevedo No comments: Links to this post
Labels: good life, money

Each of the sentences I write is trying to say the whole thing, i.e., the same thing over and over again; it is as though they were all simply views of one object seen from different angles.

Thinking about being is not an everyday act for us. Instead, we tend to become absorbed in a wild chorus of events, appointments and emotional disturbances.

Contemplate being long enough and your life will be transformed into joy unattached to any particular experience. This is like being in love without a lover. The love is just there without dependence on the presence or absence of an external party.

The joy of being comes to us as we still the desiring aspects of mind. For so long as we are "ahead" or "behind" ourselves, we are not "here now" to experience the full intensity, wonder, and mystery of existence itself. The quality of our action in life depends on our day-to-day connection to our source, our being. The sense of "I am".

Terms such as "God", "infinity", "totality", and "existence" seem to refer to something in common. It is as if they commonly map a certain feeling area of the brain. But "brain" is itself an idea that is secondary to Being. Being contains "brain".

We lose ourselves in what is "expected" of us in what we "must do". Eventually, even the very thought of being is lost to us.

Anyone who becomes committed to the attainment of self-knowledge has a journey to take back into their own heart. In part, it is the "downward path" from the head. In another part it's a "stepping back" from desire, frenzy and activity.

Look at a wall and fall into wonder that it exists! This is the radical perspective. Our root experience is our deep felt sense of existence, being, or sense of "I am".

Being is not passive, being is the stillness within all the process. Being is the eternal within the temporal. It is, in the words of T. S. Elliot, "the still point of the turning world".

I began a long time ago believing in magic, but did not know real magic. I thought magic was a set of powers that could transform the world. You think of something and it happens. That would be magic. As I got older I believed that “you would think of something and nothing would happen”. To think this way was my first and most dangerous mistake. For most of my life, afterwards, I was too worried about what people thought I could do and not-do. A deadly mistake. This is the mistake that rules the world - that causes us to surrender our inner wisdom to others.

Thinking is not doing. To think that way is already lethal to aliveness. We are alive to the extent that we feel where we are, where we have been, and where we are going. That is the nature of sentient being-hood. We are all creators of ourselves and each other. None of us is along. We are all teachers and guides for each other.


So, I say to myself and feel to myself that I am “always a beginner”. That means: I am allowed to make “mistakes” and that you are allowed to make mistakes. Beginners must make mistakes. There are no mistakes - only exploration. We must fumble around to figure to map the territory. “The sun is new each day”, as Heraclitus, the great Greek pre-socratic, may have said. So today, we are new again. Let this new day be a new you!

Posted by Merlyn No comments: Links to this post
Labels: wisdom

What's a life well lived? There's the ancient Greek ideal of virtue -- an ethical standard derived as a ratio between aspects of life. We have life and we have the "goods" of life. How we use those goods determines our virtue.

Posted by Americ Azevedo No comments: Links to this post
Labels: unfolding

Today, go deeper into your meditation.


Look for the quiet zones between your thoughts. Expand these moments of quiet.

When I first practiced meditation long ago, it was highly recommended that we practice two times daily - twenty minutes each time for a total of forty minutes a day. These days most college students find it almost impossible to carve out two twenty minute blocks without creating more stress in the rest of their lives. For these people, I recommend a "meditation installment plan".

For example, attempt eight minute meditations, five times a day. It's an installment program! One could try eight minutes in (1) early morning, (2) late morning, (3) early afternoon, (4) sunset time, and (5) in the evening.
Don't be dogmatic - be flexible. Find forty minutes total on a given day. Could be two, three or four somewhat longer installments.

Invite a friend in person, via text, or on the phone to meditate. A designated time keeper helps. Simply contact them, set up a time together, do the meditation, and do a follow up check-in.

There you have it, a meditation installment program for our busy times!
Posted by Americ Azevedo No comments: Links to this post
Labels: meditation, transcendence

The Begging Bowl was clean;
So the Busy People
Glimpsed their Sweet Reflections
As their Coins Dropped in,
And they Rushed on, Out-of-Sight.

But the Blind Beggar,
His Dark Eyes Shining Bright
Out from his Life-Long Night;
With his Grief-Softened Heart Open Wide,
Basking in Delight
“Saw” only their Sweet Light.

Which begs-the-question:
Which One is the Beggar?

Which Will It Be?

Only one body
but many places
to be

Only one life
so many
possibilities

this or that
which will it
be?

Posted by Americ Azevedo No comments: Links to this post
Labels: reality


Nothing to do, no place to go
Time passing without limit
Dropping back into the ocean of Being
here and now
“I want to say or do something profound!”
Instead, know the truth:

Let the breaths in and out,
come and go. That is enough
Relax now
I’ve waited all my life
for this moment
Why pass it up?
Posted by Americ Azevedo 3 comments: Links to this post
Labels: freedom, nothing, practices

Economics is deeply embedded with "more is better". Growth output is a god. Everything feels better when there is economic growth. It's easier to get work or grow a business. Everyone loves getting more money. Most find it impossible to imagine being happy in a world of declining income and resources. Sameness is not "enough", it's growth we want. More technology, more services, more energy, more wealth - forget expenses against mother earth. free time, community, and connection to earth and cosmos.

The Growth God is not based in capitalism but in the seeds of unlimited desire within us. A spiritual distress that is epidemic to humans with their always creating more possibilities monkey mind. 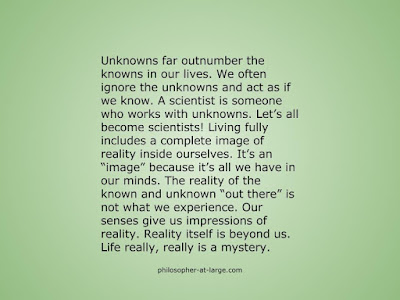 During my first year of elementary school, a little girl named Sherry often met me on the playground. She was an outcast with wild unkempt golden hair who talked in slow whispers. The kids made fun of me for talking with her. One day she brought a little book with a picture of a star. She said, “We come from there.” Yes, the substance of our bodies is stardust condensed from the heavens. We are in the heavens; someone in another solar system could be looking our way.
Posted by Americ Azevedo 2 comments: Links to this post
Labels: unfolding
Newer Posts Older Posts Home
Subscribe to: Posts (Atom)