"Jesus was going to speak at the Bank of America World Headquarters."
--Black Velvet Dreambook

The art of coffee drinking 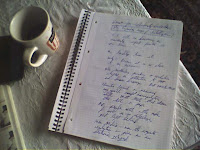 The art of coffee drinking is, along with tea drinking, one of the crowns of "the art of living." It can be practiced everyday, under different conditions.

I've gone to coffee houses for being alone -- especially to get away from the people at home, so I can write, think, speculate, ruminate, or do business. Then again, I go to coffee houses to be with people in a light way.

One of my very best friends told me that we need only plan having a cup of coffee each day! The rest takes care of itself. For us, this became a spiritual practice much like the Japanese tea ceremony. Of course, many things may happen in one day. But the art of coffee drinking is in the ease, the gentleness of the act. The simplicity of the situation. Life is good when kept down, for a moment, to a single point.

Sometimes, we would go to a place, like The Coffee Mill in Oakland, and talk about books whether, Martin Hiedegger's Being and Time or A Course in Miracles, and take periodic "mind breaks" that we called "twelve seconds." These mind breaks consisted in looking at a spot on the wall or remembering just one word for twelve or more seconds, until the mind experienced a moment of pure stillness.

That is the essence of the art of coffee drinking: to bring the mind to an active stillness. To be relaxed, yet wide awake. We naturally get this state when we drink good coffee in a good coffee house or in our favorite spot at home. Most of my best writing happens in coffee houses such as The Coffee Mill in Oakland or The Cafe Mediterranean on Berkeley's Telegraph Avenue. For me, going to the same places over and over again has a way of stimulating the writing process. But I write just a little bit each time. I don't write continuously, for that would turn the coffee house into an office, a place of work.

The power of simplicity can be seen in almost all aspects of life. The judo master flips the opponent with a thought. Remember when Ronald Reagan and Mikhail Gorbachev shook hands in front of a fireplace -- and the world felt like it was moving closer to peace between the superpowers.

Going to a coffee house and drinking that cup has become like a church mass for some of us. It is part of the ultimate order of life itself. A sign that things are working well enough for at least a few moments.

When the mind is alert and at ease, miracles begin to happen. Clear conversation between people becomes possible. If you go to the same coffee house regularly and often, you begin to know an extended community of fellow lovers of life. The alienation of modern human existence is reduced.

A cup of gourmet coffee is a joy to the palate, just like fine wine. The flavor is rich, but not bitter. The acidity is low and not a disturbance to the stomach. Coffee should be taken in moderation -- it is a drug not a food. Treat it with respect. Two strong cups a day can be more than enough. Better yet, only one cup. We should get high on life itself -- not caffeine, alcohol, or whatever.

We get the most from coffee when we practice the high art of coffee drinking. Drink it slowly. Don't gulp it down. Do not ruin the experience with "to go" coffee. Sit down. Look out upon the passing world and the people all around. Know that there is time.

My cup is now empty. My writing pad is filled with these notes. Time to go to the word processor.

I journeyed to London, to the timekept City

Shortly after graduating from college, I developed the habit of being late for work. Even during college I was often late for classes. I would constantly look at my watch and race against it to be "on time." I once read a novel where the main character got so frustrated with time that he tore out the hands of a clock. But the clock kept ticking anyway!
One day my wrist watch fell into the toilet. It was waterproof, but not toilet proof.! I lived without a wristwatch. Soon I discovered that I did not need a wristwatch. Clocks are everywhere. Banks have signs flashing the current temperature and time. A clock is located on the San Francisco/Oakland Bay Bridge. The radio announcer tells the time on the hour. There are clocks in supermarkets, offices, and classrooms. The majority of people wear wristwatches. Cell phones, PDA, microwave ovens, computer screens, and even ball point pens have internal clocks.
In the mid-Twentieth Century the concept of "flex-time" at work was revolutionary. You came into work before 8 A.M. and started at exactly 8 A.M. Just like the days in school. You could almost hear the bells ringing in your head.
I averaged five to fifteen minutes late. This was a source of constant strain between me and my supervisors. At first I thought that this was only my problem. But later I found that all of my co-workers struggled with time. My supervisor worried about looking too slack regarding this time issue. Top management knows that "time is money". Time wasted is money lost.
Many cat and mouse games were played over being on time at my workplace. We claimed that our work (much of it mental problem solving) happened on "off hours". Were we compensated for solutions to problems while we took our showers in the morning? No. Mind work does not really stop and start at the time range of 8 to 5. But as management pressed harder for our being there exactly at 8 A.M., one of our best people started reading his newspaper. He would not start doing his real work until about 8:10 A.M. It was a quiet of protest.
I stopped being late after my wristwatch drowned in the toilet's yellow waters. I discovered that I did not have to race the clock as I adjusted down my expectations of what could be done in ten or fifteen minutes. I began to realize exactly what I could do between two events, I felt like I had more time. I used to look at the spare 10 minutes in my watch, and fill up that time with something rather than going to my appointment -- naturally, I could not do all those things. I am a human being not a computer slicing nanoseconds.
In the 1920's a French critic of modern civilization argued that toward the very "end", things would speed up. We would have more and more choices, more things to acquire, and more things to do. This, he wrote, would be the human condition just before the collapse of Modern Civilization -- a civilization based on an almost exclusive devotion to the demons of money and time.
Our current lack of time is a symptom of cultural bankruptcy. We have more options than a human being can manage. We are supposed to be parents, good workers, sexy mates, and personally well developed in every way. There is just not enough time.
There is clock time and natural time -- these two kinds of time may or may not match. It's possible to be "on time" by the clock, yet early or late by natural time. We can never be "on time" by racing against the clock -- the clock will always win, if not by the numbers, by wearing us down and making us die young of high blood pressure.
When we are on natural time, we are always "on time". We are not either waiting or rushing. We are always in the right place at the right time. Doctors used to advise that newborn babies be fed at regular intervals such as 9 a.m., 12 noon, 3 p.m., etc. This was one of the first ways of taking away natural time from our lives.
The art of living is that of harmonizing clock time with natural time. Clock time holds the modern world together. So we need to adjust our clocks to fit human needs, not human needs to fit the clock. Airlines need to run on schedule. But human beings should just "show up" and move on as they will. I rarely look at bus schedules, I just show up and wait. If there are enough buses coming up, I don't worry about when the next bus comes. If I plan my days properly, I move through my appointments with time to spare.
Thumbnail image from Corbis.
Posted by Americ Azevedo 2 comments:
Labels: time
Newer Posts Older Posts Home
Subscribe to: Posts (Atom)