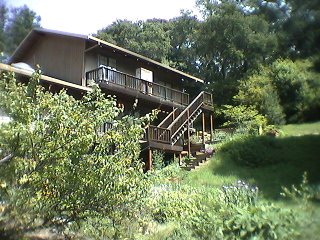 I grew up in two worlds: Portuguese and American. I never felt completely at home in either world. I did not speak a single word of English until first grade. At home I spoke only Portuguese, and at school I heard only English. The feeling and thought patterns of these two worlds became locked up in separate language systems.

I felt uncomfortable whenever my parents came to school. I did not want my friends to see me with these people who spoke very little English. If one of my American friends came over to spend time at my home, my mother became very uncomfortable. Before long my friends stopped coming over, and I wasn't allowed to visit them. School became the middle ground and battleground between these two worlds.

We all live in many worlds. Some of us may be attracted to the transcendental, but at the same time want to live a worldly life. Many of us want to be free of possessions, but still have a beautiful car or home. Most everyone feels at some time that the "grass in greener on the other side."

At the moment of birth, separation from our mother's womb, we lose the most secure home of all. From then on is pure change. All humans eventually come home -- by physical death or by becoming enlightened or fulfilled.

Where is home? Being truly home is being centered in your real self - an inner center of gravity. Home is our own deepest center. If you don't find home within yourself, you'll keep searching for it outside yourself. Home is where we rest.

Home is where the heart is.