Home Away From Home

it does not tell you to bring it back
or ask to be used as a home again
it accepts that it has served its purpose
and only wants to sing the songs of the sea
Posted by Haku No comments: 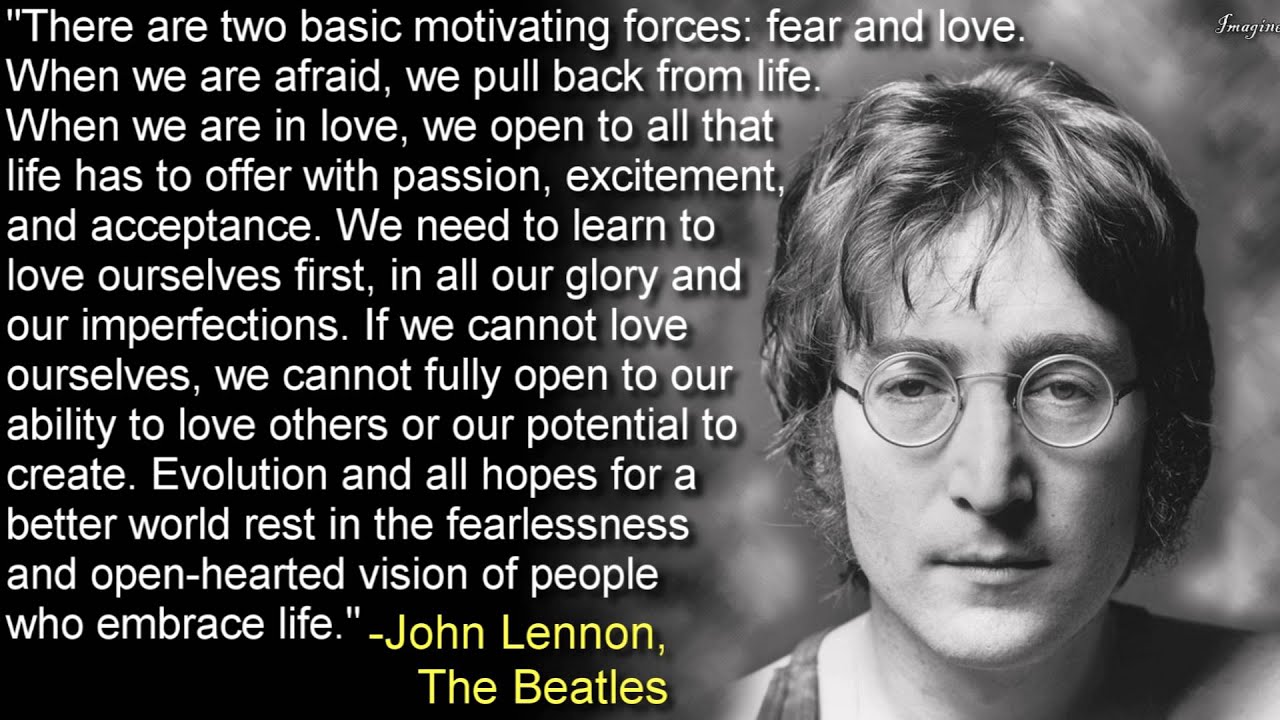 “There are two basic motivating forces: fear and love. When we are afraid, we pull back from life. When we are in love, we open to all that life has to offer with passion, excitement, and acceptance. We need to learn to love ourselves first, in all our glory and our imperfections. If we cannot love ourselves, we cannot fully open to our ability to love others or our potential to create. Evolution and all hopes for a better world rest in the fearlessness and open-hearted vision of people who embrace life.”

Lost in the woods for what felt like decades, he emerged expecting to be a butterfly.

With all the tales he had been told when he was a child about a wide-eyed adventurer plunging into the forest with only bravery and coming out a new person, he emerged into the open field of dead grass. It seemed his fables had failed him.

He shouted to the heavens, "I have struggled for so many years! Overcome so many trials and tribulations! Fought to keep myself alive..." His voice echoed through the forest. He began to cry tears full of anger interwoven with despair while he waited for the butterfly wings promised to him in his fables. As his tears subsided, he murmured to the forest, "then I have truly failed."

Tired and full of self pity, he lay on the dead grass, ignoring the tiny sprinkles of mist which collected in his beard and mustache. A thick fog began to rush though the forest like a phantasm, engulfing it entirely like a down blanket. It spread across the sky and the temperature dropped incredibly quickly, limiting his vision. As he reached into his pack to get his camping jacket, his small reflective mirror fell out and cracked on a rock. "Why!" he yelled again with a sense of renewed passion. As he leaned over to pick it up, he saw himself, after all of these months on his journey.

Shattered glass projects shattered images; this wasn't the case for him. He only vaguely saw the person who first set out on the journey; he was a young, inexperienced teenager, who decided he wanted to have an adventure. It wasn't his beard or his long matted hair, it was the inner strength he saw. He had developed a type of resolve which that boy could have never understood or believed he had inside. A tear welled up in his eye. While he might have not grown butterfly wings, he had become something more than what was promised to him in his fables. That broken image now reflected a full picture of who he had become.

Lost in the woods for what felt like decades, he emerged expecting to be a butterfly, but instead came out a man.
Posted by Haku No comments:

Talked with Glenn about silence. We came to an understanding that there is a tone, a basic tone that we can tune to.
Glenn said, “But you have to be still and quiet to hear that tone. It's like music flowing through us.”
“Yes,” I said.
“Let's have three moments of silence.”
“Yes.”
As the moments of silence came, I saw the mind weave in and out of silence for a period of time. That was good enough. Yes, good enough.

We have but two ears and one
mouth so that we may listen twice
as much as we speak.
~ Thomas Edison ~

When you arise in the morning,
think of what a precious privilege
it is to be alive - to breathe,
to think, to enjoy, to love.
~ Marcus Aurelius ~
Posted by Americ Azevedo No comments:
Labels: wisdom

To "be there" fully and simply is the greatest power.

Posted by Americ Azevedo No comments:
Labels: being, presencing

I didn't think I would hear anything profound on a Netflix show about a superhero. I had to transcribe it because it isn't even online. Just goes to show you that wisdom hides everywhere.

"You get what you deserve"

It's an old saying, one that survived the years because it's true for the most part, but not for everyone. Some get more than they deserve because they believe they aren't like everyone else. That the rules, the ones people, like me and you, the people that work and struggle to live our lives, just live, don’t apply to them. That they can do anything and live happily ever after while the rest of us suffer. They do this from the shadows. Shadows that we cast with our indifference, with a pervasive lack of interest in anything that doesn’t directly affect us, we, in the here and now. Maybe its just the shadow of weariness, of how tired we are, struggling to claw our way back to a middle class that no longer exists because of those who take more than they deserve. They keep taking until all that’s left for the rest of us is a memory of how it used to be before the corporations and the bottom line decided we didn’t matter anymore, but we do, you and I, the people of this city, we still matter.
Posted by Haku No comments:

Falling In Love With Wisdom


The roots for the word “philosophy” simply mean “the love of wisdom”. I fell in love with philosophy while taking a Great Books course in high school. We used a wonderful book of readings titled Preface to Philosophy: Book of Readings. All the great philosophers were there and many other great thinkers, poets and general writers. All the great ideas seemed to be there. Everyone so wise. My mind and vision expanded to new limits. It was wonderful. Thereafter, I wanted become one of “those” writers or thinkers. I wanted to see, feel, and breathe in reality!


Still points are marked by the absence of mental chatter. Suddenly the ears are softly ringing with the white noise of air molecules beating against the ear drums. A silence comes; and an infinite sense of visual space without content opens up. 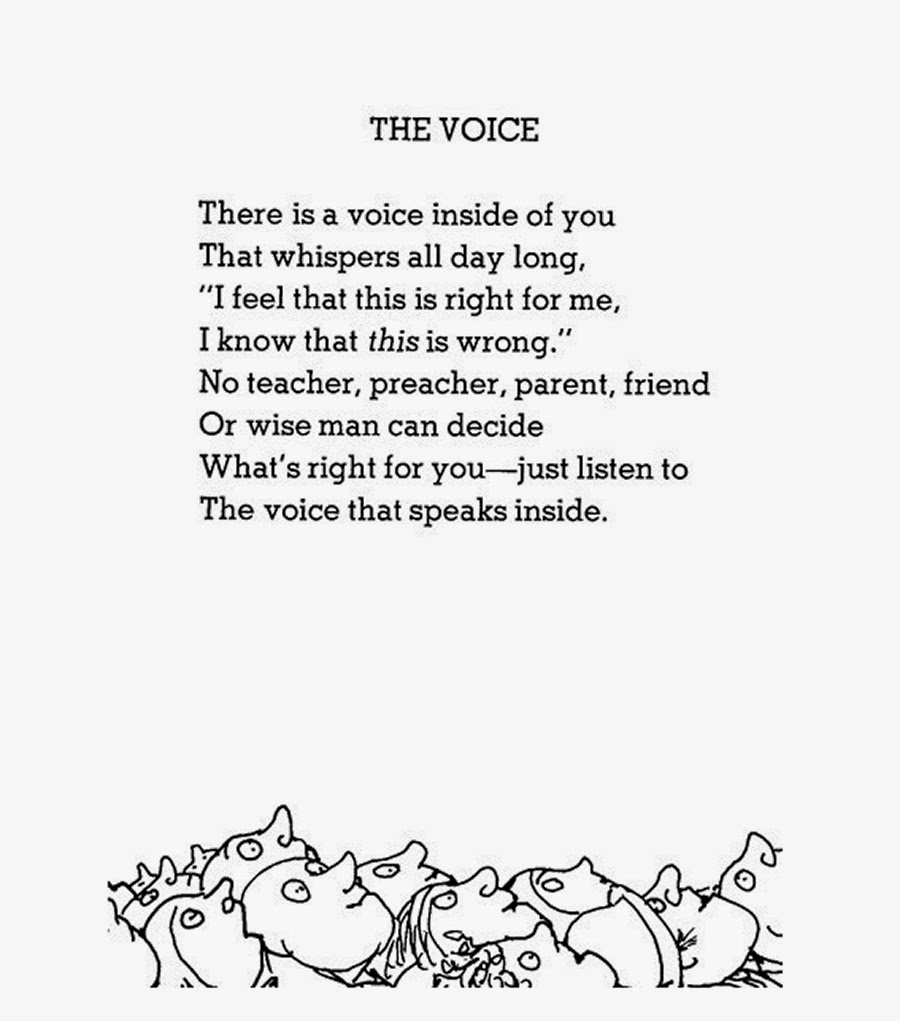 It speaks for itself. From the book "Falling Up" by Shel Silverstein.
Posted by Haku No comments:

"Empty your cup so
that it may be filled;
become devoid to
gain totality."
- Bruce Lee

Posted by Americ Azevedo No comments:
Labels: being, wisdom

Don't expect "perfection" from your teachers and rock stars. Allow yourselves to relax enough so that you too can write, draw, play a musical instrument and sing. Even Buddha and Jesus did things disapproved of by friends and others. Their "imperfections" were part of their wisdom.

The sound at the end of sound is silence; so much is said without saying a word.
Posted by Haku No comments:

I tried to do this on my own.

I tried to guide others
When I could not guide myself
I tried to see
Through eyes that were closed
I gave my heart recklessly
Yet, I could not love myself

I see so much light around me;
Why then am I left in the dark?

Let me grieve entirely
Let me see through my tears
Tonight, show me a brighter way

Posted by Haku No comments:

Age is just a
stop

counting
life
as we run
laps
around a field

Posted by Haku No comments:

As we age, it becomes harder to cry. The vulnerability we experience can be too frightening to reveal to ourselves let alone others. Instead, our subconscious mind reads the writing on our heart and we become heavy. Whether we notice it or not, our breath begins to weigh us down. It starts with the heavy sigh and if left unresolved, a broken breath surfaces. We've all experienced this breath after crying and now it is trapped inside. It's only when we notice where that weight comes from can we face it and return our breath to normal.

Breath easy today knowing that freedom is only a breath away.