Who is the peacemaker? 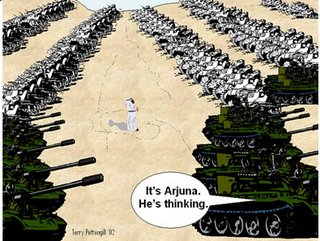 When there's lots of talk of war in the news, it's a very natural response to wonder, is peace possible, and who is the peacemaker? I tend to react instinctively, and say that peace has to come from within, that one must learn how to be peaceful from a special place inside. But it's not that simple. Even as individuals we feel anger, and that anger festers inside, and somehow has to work its way through us, or outside us, it may have to create depression, or we may have to get angry and express it. Then it's over, like a storm it's over. I suspect that wars are like that. Some kind of emotional/spiritual toxicity develops, and there may be no way to avoid releasing it, which appears totally irrational and crazy while it's happening.


So how can there be peace? I don't have an answer. If I look to ancient teachings, like the Bhagavad Gita, there is a war between two groups, two families that know each other well. Arjuna and Krishna are in the field of war, and Arjuna says to Krishna, "Take me to the middle between the two armies." And for a moment, time stands still, and they contemplate the 'reality beyond the relative reality' of everyday life with all its killing. And Krishna says to Arjuna, "You know these people cannot really be killed. They always have been, and always will be." Yet Krishna also says to Arjuna, "You must fight, because that is your destiny."

It may be our destiny to fight and to kill, who knows? We are only human, after all. If even the gods must fight, perhaps we must too. Yet if there is ever peace, then that peace must have been our destiny too. Ultimately we may have no choice, but we have the very real illusion of choice. We can choose war, and we can choose peace. Who is the peacemaker? He or she who makes the peace.